Nothing makes us happier than when a Mastiff finds his or her forever home. That’s why we work so diligently with our applicants to find that special dog who will quickly become part of the family. We are delighted to share our special stories! 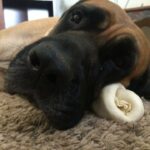 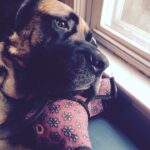 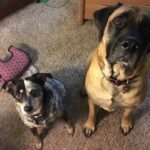 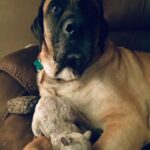 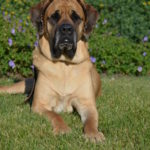 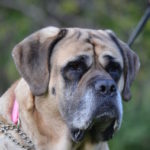 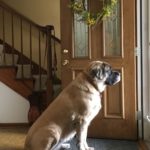 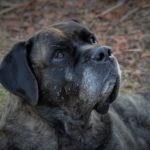 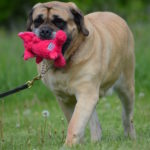 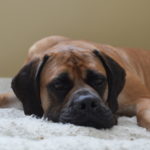 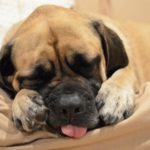 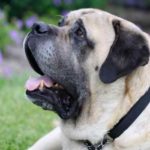 I am Susan and this is a little bit about my GLMR dog, Sophie. Jonie was instrumental in our becoming a family and I can’t thank her enough. I could not have chosen a more compatible dog.

Sophie Blossoms in Her New Home with Susan

According to her foster parents and Jonie, she was a fairly neglected dog that was going to be used for breeding but some physical defects prevented this from happening. It sounds as if she spend most, if not all her time, in a cage or pen. She arrived at her foster home with no manners and very scared. I got her at 9 months and 92 pounds, after 6 weeks of great care and good food at her foster home. She was so timid when I brought her home, she would barely go off the deck to take care of her business. She has since grown into a beautiful girl with a goofball personality and is now 131 pounds at almost 3 years old.

Sophie is a joy to be around. She is a sweet, happy dog who has several favorite things in this world: a) throwing her butt into your leg to get scratches b) grandpa C) lying next to grandpa to get tummy rubs d) bananas and frozen peaches.

She is also just a little bit spoiled and can be a diva at times, like when she doesn’t think I’m moving fast enough after she’s given me the signal to come in; I get woofed at.

Sophie is my girl and I can’t say how much she means to me. I gladly trade being able to sleep lengthwise in my bed for all the comfort and security she gives me.

I would also like to add that each person I’ve come in contact with through GLMR is dedicated to the well being of these mastiffs. They truly care about finding compatible, loving homes for these dogs. Thank you everyone at GLMR, you are all awesome!

Gus (aka Tanner) Finds His Forever Home with Nicole & Cory

After having a mastiff family member, it’s hard to not have one. About 6 months after our OEM Frank passed away, we adopted a pit-mix girl Lola. It was abundantly clear that she needed a brother once she was adjusted to her new home, and we knew we wanted another big guy. We contacted GLMR and told them when we were all ready to start looking for our new addition.

We got a call about an 18 month old guy who was dropped off to be boarded for two weeks and was never picked up and spent nearly five months there. (insert heart breaking for this poor pup already). We were one of those difficult families who had a laundry list of requirements for temperament etc, and upon evaluation, he met the criteria of getting along with kids, and other dogs, so we made arrangements to have him brought to the house. We planned to foster him, with intent to adopt if he and Lola got along well. He jumped out of the van, sat next to me, put his head on my stomach and leaned in. Momma’s boy for sure. He was obviously nervous around men when he arrived, he didn’t care for stairs and he also seemed to enjoy surfing for food on the counter tops, so we knew there was a little bit of work ahead of us.

The next few weeks went smoothly with spending supervised play time with Lola, and adjusting to his new home. I knew when he considered this his home when he zoomed around the house and followed it up by bringing me his food bowl.

Now seven months later, he has adjusted beautifully; he and Lola are best friends and he has the funniest personality. He now has free reign of the house with Lola, they nap together, play together and steal toys from each other. He also LOVES to bark at people passing by on the sidewalk as part of his daily routine. Gus is SUCH a ladies man, but we are happy that he now enjoys playing with my husband and has become much more at ease with men in general. He now just sits and smells at the counter instead of helping himself and while the stairs are still a work in progress, I am confident we will get him there. He is such a good boy and we are so glad that he is part of our family.

Murphy came to us a little over a year ago as a foster with an eye towards adoption.  We needed to try it for awhile because we have another dog who sometimes doesn’t get along well with other dogs.

He was a very shy, fearful, 3+ year old boy who would cower and shake when we moved to pet him. He had no confidence and displayed a great deal of separation anxiety as well.  Incredibly, we couldn’t leave the house for 3 minutes without him becoming severely distressed.  His problems also manifested themselves in that he licked and chewed his tail to the point we thought it would have to be removed.  He also drank water constantly.  We didn’t know it, but its a psychological disorder called Psychogenic Polydipsia.  Lastly, he shook uncontrollably with fear when out in public.  We realized we had our work cut out for us.

After a few weeks, we realized the dogs were getting along and decided we were the right family to work with him to improve his confidence and ease the anxiety.  We decided to give him a forever home and adopted him.

We’re happy to report that love, patience, and stability have prevailed.  Murphy no longer drinks water constantly, and stopped chewing and licking his tail.  Now, he’s eager to be out in public and his tail wags the entire time!  He completed a basic obedience course, seemed to enjoy it and was one of the top performers!

We’re up to almost 5 hours that we can leave and simply arrange for an in home sitter if we’re gone longer.  We love to watch him sprint across the yard towards us when called now!  The best part is that when we reach to pet him, he rolls over and presents his belly for rubs!

Murphy has made awesome progress in overcoming significant issues and has learned to trust us.  We learned that stability, love and patience can make a world of difference in even the most needy dogs.

We love Murphy and are grateful he found his way to us.  Many thanks to all the GLMR people who helped make this a success.